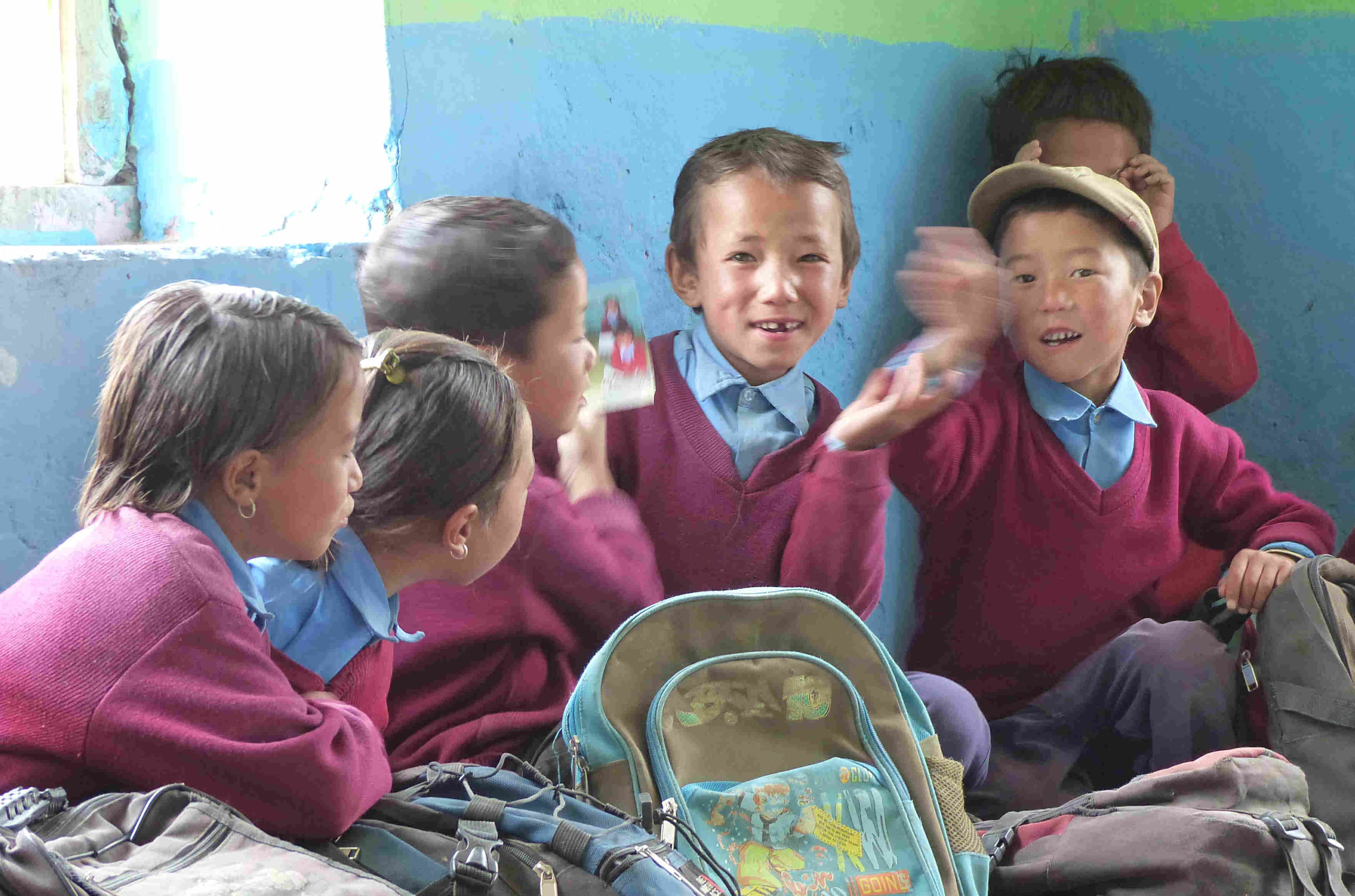 It was already late afternoon as our bus rumbled along the stony road, and all at once just after the next curve in the road, the village Reru came into view. Only a few hundred meters and finally we had reached our final destination, the school project Jamyang Ling. Somewhat stiff from the long journey, we got off the bus and were amazed to see the long row of school children, standing in line and holding bouquets of flowers to welcome us. Many Kataks, white scarves, were hung around our necks, and then finally Gyalik, the chairman of the school, and Tsering Tsangpo, the headmaster, together with all the other teachers, stood in front of us and greeted us with laughing “Juley”.

We received the final Katak from the Head Lama Thubten Thinley from Dharamsala. He and three other Lamas had already been there since two weeks to prepare an Avalokiteshvara mandala and our group would be able to witness their performance, including its completion scheduled on the last day of our stay. After a welcoming cup of tea, the older students grabbed our backpacks, and we went up the short but steep and rocky path to the lake. We were completely surprised by the sight of numerous tents, the large meeting tent and the colourful Buddhist flag that fluttered on the top of the tent. Amchi Lotus, an old friend from Manali, who had accompanied many of our trips, and had always cooked for us excellently, had prepared a snack: and as such, we were to enjoy the view of the snow-capped mountains and the panoramic landscape. During the following days, we often visited the school, went into classrooms, talked with teachers and students, and stopped by at the hostel several times, because we were so impressed by the way 68 children were being cared for there, so lovingly and at all times of the day.

A special highlight was the annual school party. Early morning 127 students, teachers and 4 Lamas, another 12 monks from the Mune Monastery, including our group, had gathered to climb up the hill opposite the school, where we set up new flagpoles at the Stupa. The monks chanted prayers, and at the end we all threw grains of barley up into the air, a ritual act for health and happiness and for the good development of the school project.

Walking in a long procession, we arrived at the school, and after a short time the children began with their presentations and competitions. Everything had been well prepared by the teachers and older students, and we all had lots of fun.

This was also a day off for the 4 Lamas. A day after our arrival, first commencing with an opening ceremony, they began with the creation of an Avalokiteshvara sand mandala. Mornings and afternoons, we sat in the upper room of the old school building, which had been specially made windproof. Its adjoining room was decorated with beautiful carpets and seat cushions for spcecial guests. It was in the upper room where the colors were pulverized in a mortar, and where the monks could withdraw and take a break or drink tea.

One afternoon, Lama Thupten Thinley explained the requirements and discipline necessary for this mandala. We were all aware that this was a very valuable and unique opportunity for all of us to watch the mandala being created, day by day; and that it was an important enrichment for all those present, for the school, the village Reru and for all of Zanskar. Such a complex mandala had never been created before in this region!

Every day, you could hear the metallic sound when a metal rod was scraped over the narrow funnel that was filled with fine sand: the vibration caused the sand to flow down from the fine opening of the funnel. Millimetre by millimetre, the pre-drawn mandala was completed. All Lamas wore a mouth guard whilest working. They were totally concentrated and apart from the metallic sound, it was mostly very quiet in the room.

On the evening of the school festival, Stefan Laug, who had considerable experience in ceremonies for earth healing, started making the preparations for a circle of light, which was composed of 108 butter lamps that were to burn all night. With a fierce wind blowing, this was not an easy task. Several members of the group jumped in to help to construct miniature stone walls around the lights. It was a very powerful moment, when all 108 butter lamps were shedding their light within the circle.

The mandala was completed the last day of our stay in Reru, and Thupten Thinley Lama led the closing ceremony. We then had the opportunity as a group to ask him questions about the mandala. Finally, he told us that the mandala would not be dissolved and the sand handed over to the river as usual, but that it would be stored in the tightly closed space, so that the population of Zanskar Valley would have the opportunity to view this extraordinary mandala in the coming weeks.

At question time, Thupten Thinley Lama explained the symbols and colours of the mandala: everything is designed to give us an idea of the movement of consciousness in time and space.

We realized that mandala art is a complex and sophisticated technology to make us vividly aware of our own soul in the form of a "symbolic map". In the Buddhist tradition, it has taken thousands of years to collect all the meditation experiences, to represent them pictorially, and to create the symbols representing these meditation experiences. The colours that are used in the mandala are assigned to the different Dhyani Buddhas; they are represented in the colours blue, yellow, white, red and green; they symbolize the range of experiences of our human life, a synthesis of time and space symbolically represented in the form of a mandala.

Ending with a ceremony and meditation, the completion of the mandala was honoured; then there were tea and biscuits for the Lamas and our group.